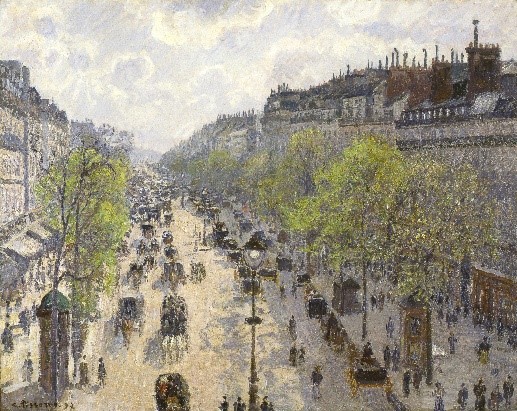 The work of Richard Burck Associates explores the concept of urban theater in the design of contemporary public spaces. In the late 19th Century French Impressionist artists creatively documented and interpreted the mid to late 19th Century major changes to the urban fabric of Paris under Hausmann. Changes that, in their transformative scope, are not unlike that found in Boston’s Seaport District.

For the Impressionists, Hausmann’s streets and avenues offered a new way to orient within and comprehend Paris. Many of their paintings explore these urban transformations as a new geography of place. Within this new environment these artists found special, settings, often windows and balconies, from which these transcendent vistas could be experienced. Manet’s The Rue Mosnier Decorated with Flags, 1878 looks along a quotidian street in Paris after a special event and along the left side of the painting, a make-shift fence conceals an active construction site. These urban transformations, for a transitory festival and of the longer lasting built fabric, are experienced and expressed by Manet as the setting of everyday life. Caillebott’s Young Man at His Window, 1876, as with the other painters, is situated at a window. A loge from which to observe and comprehend the urban theater of the streets and to make sense of a changing urban landscape. The elevated viewpoint afforded from the window of Pissarro’s room in the Grand Hotel de Russie sweeps the viewer down the wide sunlit expanse of the Boulevard Montmartre, Spring, 1897. The contemporary spectacle of movement and promenading on a wide tree lined street is interpreted by the artist as a topographic setting for modern life. The urban equivalent of the rural and natural landscapes of the Hudson River School of painting from earlier in the same century.

Describing and celebrating the distinct qualities of place and its inhabitants is fundamental and in many ways unique to the practice of landscape architecture, and as such has been a focus of our practice for decades. Along the edge of Fan Pier, moving west along Harborwalk one can find probably the most revelatory view of Boston anywhere in the city. Here, place making gives way to revealing the power of the setting and the relationship of there to here.